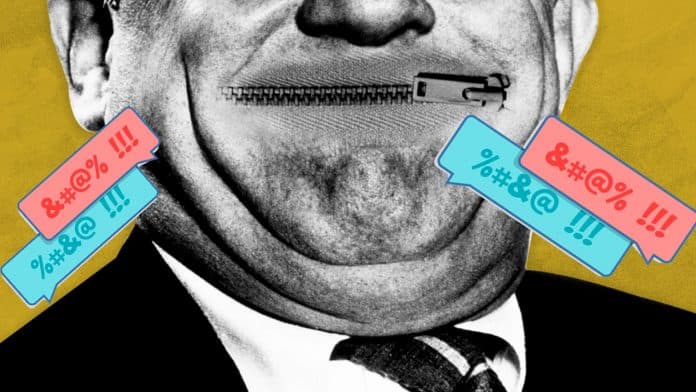 Art in its true form should be the deepest way of expression. It should be left to evoke feelings in its audience, calling for an impact, a change, a movement.

Following history, art has a way of telling the ‘true’ story of the times, showing a unique artists rendition of events. Today, art has transformed thanks to its availability online but, should its presence be regulated due to its ease of access? This question was raised after American visual artist Kate Kretz was banned from Facebook back in May after sharing her newest collections with the world.

These were not just any pieces, many creating heated debates about their content and raising the questions about how censored and regulated art should be.  Kretz’s pieces feature the current presidents famous red ‘MAGA’ hat stitched together in other forms, most associated with hate and fascism. As most can imagine this created a whirlwind of comments, as this is one of the most sensitive topics the country is facing as of late.

The artist, just like many other, uses the help of Facebook and Instagram to share her pieces with the world in hopes to take advantage of the marketing and exposure opportunities it brings. After sharing her reconstructed pieces featured as part of ‘The MAGA Hat Collection’, her work was welcomed by a slew of comments, some supportive, others not; beginning a statement frenzy mixed with name callings and hatred. Facebook decided to ban her from the community, labeling her as a violator of ‘community standards’ and for content labeled by the company as ‘hate speech’. In response to this action, Kertz explained:

“It is important for Artists who we agree or disagree with to be able to show their work. Many make their living via social media platforms. Not only is this an issue of artistic freedom but of livelihood.”

The purpose of these pieces was to shake up the current controversial presidency, this being the campaign that has been behind so much violence and hate and a sort of ‘resurge’ of the infamous hate group the KKK. This is an uncomfortable topic for most, showing a clear and wide divide in the country however, should artists shy away from these topics for fear of stirring up the atmosphere? This is the question popping up around the web as her art gains more exposure, featuring red KKK hats with the ‘MAGA’ slogan and armbands stitched in the form of a swastika, the once peaceful symbol turned into a lasting sign of hate after its adoption by Hitler’s Nazi party during World War II.

Facebook eventually lifted the ban, Kertz giving thanks to her fans but, whose to say other artists with the same goal of creating this social impact aren’t experiencing the same. The first amendment to the constitution gives all the right to practice freedom of speech, but have we found the ‘governmental’ limits of that? Perhaps her pieces, besides the goal of keeping ‘history from repeating itself’, serve another purpose; one that shines the light on true freedom of expression and rather we really are free or free with limitations.

ParisJ - 0
The merger deal looked great. The automotive industry was optimistic and excited. Fiat Chrysler (FCA) was going to merge with Renault and this was...

ParisJ - 0
Soccer is a global sport that has players from nearly every country and several leagues as well. As a soccer fan, it can be...