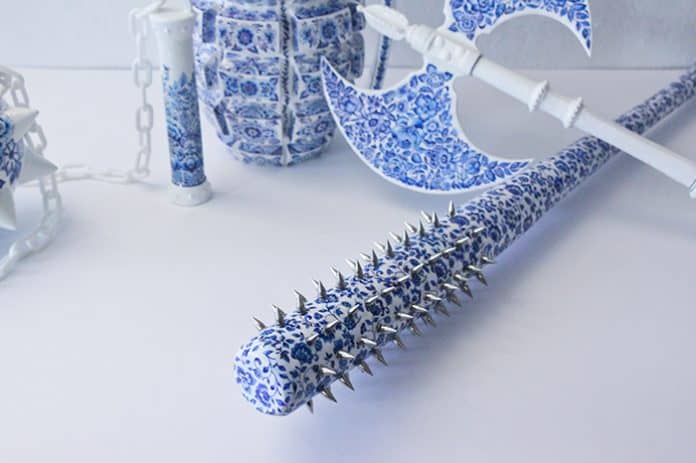 In an attempt to shatter all labels that come with being a woman, artist Helena Hauss has taken delicate and fragile pieces to another level, shaping then into weapons and bombs. Crafting the molds herself, the artist casts these porcelain pieces as a representation of, ‘the inner strength and fury that comes with being a woman, in contrast to an appearance of delicacy we’re too often branded with’. This collection features traditional designed botanical backgrounds of beautiful blue flowers on a smooth bright white porcelain backdrop some lined with sharp metal spikes and studs.

Hauss is a Paris based artist that is known for her ballpoint pen pieces. After studying for several years in London and France the artists’ works gained momentum not only due to her obvious talent but for the messages conveyed through the pieces; many questioning the labels society puts on groups of people. Since 2016, her masterpiece pen works have been featured in art galleries and fairs throughout Paris, gaining her a following and recognition. Her technique is unmatched, some appearing girly and colorful but with hidden darker messages within. Nothing is as it seems at first appearance, with every piece hiding small details that viewers can look at for hours guessing the inner works of the ideas and thoughts represented in the drawings. Nowadays, she has decided to take her talents and convey her message through other methods, dabbling in the world of sculpture and ceramics.

This exploration and her constant battle to make sense of social behaviors towards individuals led her to create the “Hell Hath No Fury” collection where she tempts to challenge the never-ending battle women to face with a label as the “weaker sex”.  She created the molds herself, using weapons used by men in wars throughout history including grenades, flails, and axes. She then fills these molds with Polyurethane, a substance that produces the same appearance as porcelain on the outside but in reality, holds a strength that is very difficult to break. The artist chose to decorate the outside with very feminine looking floral designs painted both white and shades of blue, mimicking designs from tea sets and paisley porcelain pieces of the past. Not only are the weapon shapes breaking the mold of the traditional floral décor, but also the presence of spikes and studs on some pieces, further contradicting its outer femininity. 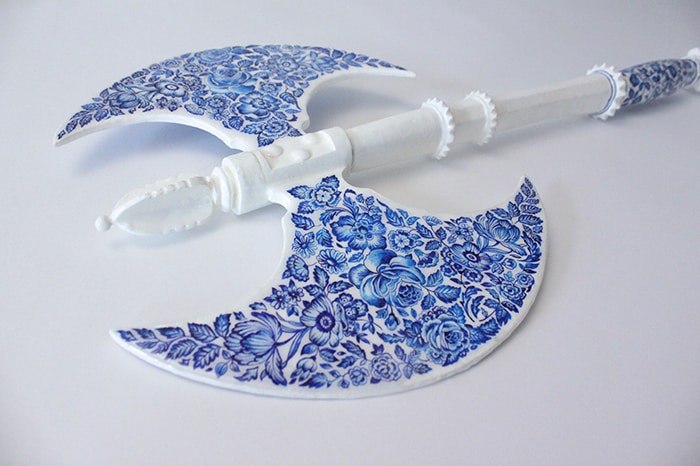 When asked about the collection, the artists stated, “Too often portrayed as fragile and delicate, this project is an expression of the contrasting subtleties that come with femininity, as well as an attempt at vindication from a feeling of constant vulnerability that’s been forced upon us.” It has been her goal as an artist for several years to take the labels and boundaries of social labels and break them, showing that behind all the judgments there is an individual, all of us unique in our own way. Though this could raise some eyebrows, especially with tensions between the unfair treatment of women throughout the world, the artist has claimed that she has no political agenda in mind, only wanting to express freely her thoughts and opinions within as she herself has struggled with the label of ‘femininity’.

The collection is already receiving attention, mostly positive though nothing on the world wide web is safe from criticism. Female artists have forever been underrepresented and sadly today is no exception with a study conducted by Guttman College in New York in 2017, revealing a 70/30 gender ratio exists among the top 45 galleries in NYC. Though this is changing, the pace has proven to be slow requiring femme Fatales to fight. Hauss mentions this vulnerability that the world has placed on the shoulders of women and has made it her mission to show the true power and strength of a woman. Her work stands up and delivers the same message as other activists in the field as they fight for the representation and abolishment of inferior labels.

The Hell Hath no Fury collection is only the beginning of this idea as Hauss has promised to continue developing this idea. With plans to push forward and continue the fight toward a different view of women, she has revealed her next project is currently in the works and will be made entirely out of embroidery. She plans to stick with the same idea of erasing labels calling out all to show their true “identity rather than having to apologize for it”.  This collection is currently featured in the Paris Art Fair and its next destination is unknown at the moment. To date, most of the artist’s work has been around Paris and of course all-over social media. This collection has already caught the attention of art enthusiasts and female activists around the world growing her following.

Art has a way of bringing light to those emotions hidden deep within. Women have fought countless unsuccessful battles to be taken seriously, to shatter the idea of being grouped together and stuck with an image of delicacy and weakness their entire lives. Artists like Helena Hauss are at the front of the lines in this battle, calling out those labels and calling for the world to open to their eyes to what is true, what is real. Women are resilient creatures and can endure more than they’re given credit for. Many writers hit on this topic, writing stories of all the emotions and hardships they’re capable of withholding all while keeping a delicate and feminine outer appearance. Though this is not a battle that will end today, tomorrow, or perhaps even in the next 10 years, it is an artist like this that put these different perspectives out into the world calling for an alteration to the thoughts of society. Get behind the movement, open your eyes, channel that proud and strong woman within because we all no Hell Hath no Fury like a Woman Scorned.

Coronavirus is the New Black: How a Virus Is Taking Over the Arts

Get Your Craft On! With These 2020 Trends, You’ll Want To Check Out

ParisJ - 0
Entertainment is on another level lately, thanks to e-commerce. But first, let's go down memory lane. In our grandparents' times, radio and TV were the...

ParisJ - 0
Soccer is a global sport that has players from nearly every country and several leagues as well. As a soccer fan, it can be...

ParisJ - 0
The ultimate trailer of Warner Bros. and DC Film's collaborative venture Joker is out now. And Todd Philips has this character headed into a...