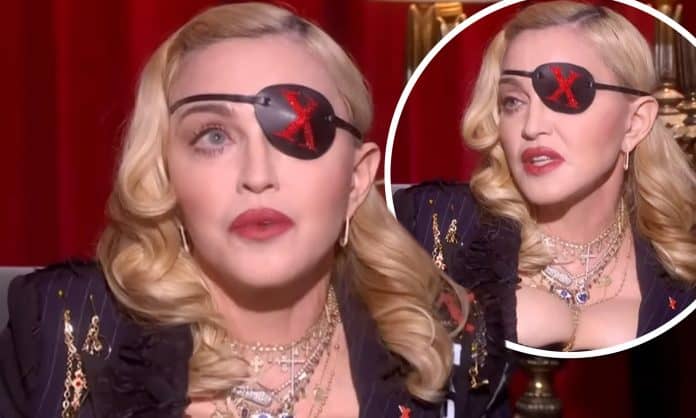 Madonna’s real finesse and creative edge to embed depth, as well as shades of soul-stirring greys into her piece, are what tickles her fans.

Being a pop queen on top of it is just another cherry on the cake that amplifies the Madonna madness even better. 19th September was when Madonna hit the stage for an intimate crowd at the Brooklyn Academy of Music. Further, proclaiming freedom to being the vibe of the show and her own life too. Despite being explicitly expressive of her pursuit during the concert, she kicked it off on a smooth note.

Yes, a typical Madonna-style with an unabashed mix of top-notch art and overrated camp:

After the silhouetted typist hammered out a James Baldwin quote and a lissome dancer mimes the act of dodging bullets, eventually giving in to the salvo. Madonna enters the stage, gazing from under a Revolutionary War-style hat while a battered American flag flutters through video projection. Well, there couldn’t be a more trashy way to present a show that speaks volumes of what personal freedom and danger meant to the legend.

‘God Control,’ which is Madame X’s first lush disco doozy, switches the focus from national mythology to personal history. Yes, it illustrates without an error the sweaty floors of New York discotheques of the late 70s where Madonna found her freedom. And now the legend views it entirely under fire or so to say the song’s a musical ode to the Pulse Massacre of 2016. Nevertheless, this ode with gunshots sewn in it is an explicit reminder of the incident.

Ahead of this, Madame X tour takes turn towards other freedom she sees under coercion, namely the freedom of voice and action. Dark Ballet finds her enacting the persecution of Joan of Arc. The video’s full of religious imageries that strike a chord with her contentious videos of back in the days. I doubt if it doesn’t remind you of her at issue 1989 video, Like a Prayer. This number’s served a great opportunity to the legend to pin down the critics ready to hang up women voicing sex with a coy blush.

Amidst her ‘Express Yourself’ Capella, Madonna brings out her children, Stella, Estere, and Mercy James. Other than accompanying the dancers, the three of them read aloud a few empowerment quotes given over by the mother itself. And Madonna’s eldest, Lourdes, joins the stage as the star of the evening. Well, the girl’s surely dwarfing her mother this time. As Lourdes’s three-story-high clip rocks on-screen, Madonna delivers the soul-stripping recital of her classic hit ‘Frozen’ from 1998. Seeing Madonna lost in her daughter’s dancing on-screen as she sings was one of the standout moments of the show.

Another bombshell was her ‘American Life’ track from 2003, which was unjustly run down for no good reason. Or so to say, the creativity that fell prey to a politically chaotic era than a deficiency on the artist’s part. Well, the track indeed was a startling setlist choice here. Further, the legend disparaged the list of unsatisfactory capitalist concessions snaking her arms above her head. Well, the hitmaker was phenomenally into this glitch pop pick.

Most of her Madame X numbers had the fresh and loose vibe and, they dominated the setlist. The show was a failure for those coming up to see a parade of her greatest hits. Nevertheless, for those ready to welcome the newness had the time of their lives at the concert. The show was a stunner for the ones allowing Maddona her much needed freedom. Yes, the show was a success for the Maddona fans trusting her to showcase her creativity.

Moving to Lisbon for her son’s football aspirations, Madonna’s drawing her inspirations from the music she found there, namely, Fado, Morna, salsa, etc. Apart from her Madame X tracks, there was her original non-album song titled Welcome to My Fado Club. Fado song’s mashup with La Isla Bonita could land her the perfect chance to moonlight as the enchanting hostess of a Latin club. Contrary to Beverly Hills 40’s productions, Madonna did embrace the legitimate talent she was tributing.

The 61-year-old vocalist did invite fado Singer Celeste Varela’s grandson Gasper on-stage several times. Moreover, she also had an all-female orchestra from Cape Verde for her highlight track, Batuka, from Madame X. The ladies accompanied the legend pretty well for this rousing and booming number.

Queen of Pop went on to say that she did not worry about popularity at the end of the show. For the Madame X tour, we trust every word of hers. On 19th September’s night at BAM, this authentic luminary broke free of setlist demands, time curbs, and an arena full of mobiles desperate to get a 30-second snippet for Social media posts.

Madame X appears to be a spy, a teacher, a saint, a whore, a cha-cha instructor, a mother, and whatnot. But she’s more in this record than listed, in the album’s notes. Yes, with this record we see the more authentic Madonna Veronica Louise Ciccone, we’ve missed seeing for some time.

Madonna has also announced her full Madame X Tour schedule in the US and Europe. Well, the tour kick-starts with a 17-day residency at NY’s BAM Howard Gilman Opera House, which wraps up on 28th September. Forth, the vocalist will visit Chicago, Los Angeles, Las Vegas, Boston, San Francisco, Lisbon, London. Moreover, other cities like Philadelphia, Miami, and Paris will, too, have the Queen on stage rocking at a No-Phone concert this time. The European tour is set to begin in early 2020.

Well, the whole theme of this 14th record that the Queen drops straight after her 2015 album Rebel Heart is out-of-the-box and experimental. Even the responses did collide on this with some calling it the album of the decade. And a significant amount of others finding it a disturbing reminder. Even the concept of an intimate setting rather than a full-blown out concert is wholly fresh and exciting. There’s been news about Madonna indulging herself in spats with fans trying to break her No-Phone rule. But all we hope is for Madame X to be a record-breaking success in her career. And to experience this, don’t forget to book your tickets because this album surely has a one of a lifetime kind of vibe.

ParisJ - 0
Gamers have always been aware of something everyone is just trying to figure out in the present age, which is the social life at...