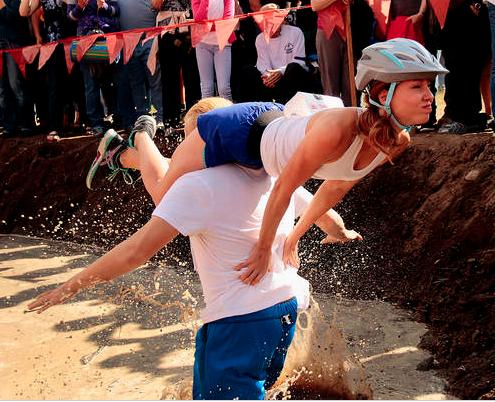 I know many of you will find it weird but believe me it is a sport and it has a world championship. We all know that this sport originated in the Sorjenko-city in Finland. The sport has a long history and officially played in 1997 as a competition. By registering itself in the Guinness Books of Records, the sport is famous across all continents.

Set of the rules:

All set standards related to this sport are by the International wife carrying competition rules committee. The purpose of the original game was to build strength and to run faster with weight on the back. This sport is often though treated as a joke, but competitors take it seriously.  The prize money is a beer of the wife’s weight.

The International wife-carrying championship rules are the basis for all competitions, but rules and prizes do vary for each competition.

Reach of the sport:

Wife carrying contest so far has been sportingly played in the United States, the UK, India, Germany, Australia, Hong Kong, and other parts of the world besides Finland and nearby Sweden, Estonia, and Latvia.

The first world championship was as per record held in the year 1997, at Finland and it was with a history of 65.0 seconds won by Finnish couple named Jouni and Tiina Jussila. In this year 2019 Vytautas Kirkliauskas (Lithuania) and Neringa Kirkliauskiene (Lithuania), 66.7 seconds, a Lithuanian couple took away the championship. The highest record is of 69.2 seconds by the Estonian couple.

A sport to build relations stronger:

In today’s fast and busy life, some recreation is very, much needed. Especially in the society where husband and wife both are busy in earning. Wife carrying for traditional or to a people having unnecessarily concerned with the customs of society may find it as a game of shameless people, but for many couples, it is a bridge that fills a gap.

Premier League: What happened In The English Top Flight On Saturday?

Biles Sets Record For Most Medals At Gymnastics Worlds